A super rare and expensive Japanese arcade poster of OutRun was unattainable unless you paid hundreds of dollars and was lucky to win the few that appear on Japanese auction sites.

I decided that I would have a go at recreating the poster by using other items from Japan that used the screenshot images of the poster and re-creating other elements from scratch. Below is the result and it’s been kindly made available to the masses by UK shop Arcade art shop < link. Thanks to Chris White for sharing some images from his original poster.

After several years of being on mobile devices Horizon Chase gets a ‘Turbo’ upgrade in the title and races on to the Nintendo Switch. Obviously being a huge Sega fanboy of the 80’s and 90’s it was on the purchase radar as soon as the first screenshots were released. You see, Horizon Chase Turbo was created by people who loved Sega games of that era too. Imagine Sega’s classic 1986 game Outrun being mashed with the low poly perfection that is Virtua Racing, add a pinch of additional race options, a topping of extra game modes and season it with multiplayer and you have one tasty Nintendo Switch racer that will want you coming back for more. 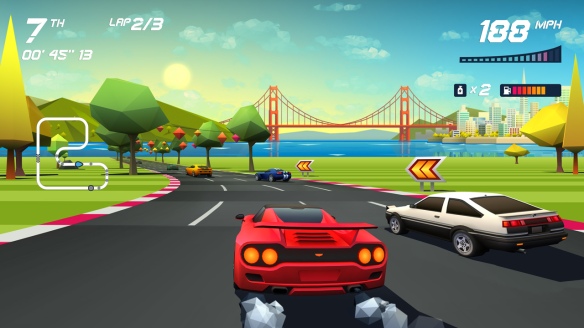 Horizon Chase Turbo’s graphics pop on the Switch 6.2 inch screen with vibrant gradient coloured skies and super smooth fast scrolling, there’s plenty of variation too as you visit 12 different countries/locations (48 races) in World Tour mode, the main game in this package. Variation doesn’t stop there either with weather effects taking place including snow, rain and stunning lightening effects to name a few. Then there’s the decent size roster of cars in the game too sitting at 32 in total. These can be unlocked playing through World Tour and completing Tournaments. As there is no licencing, cars are based on real cars with a slight twist in their design, you won’t have to look hard though before you see the likes of the Ferrari F50, Honda NSX, Lancia Stratos and the Back To The Future DMC Delorean. The core of gameplay requires you to come in the top 3 for a race to earn a medal and points, additional points are gained by collecting tokens around the track and fuel. Additional Turbo’s can also be collected if your reflexes are quick enough. The handling is really solid in the game and within seconds of playing you get the feel for the cars and how much you can push them on the track.

What else does Horizon Chase Turbo have to offer? Well there are 3 other racing modes to keep you playing – Tournament which has 3 difficulty classes to progress through with the main aim of coming first at the end of 4 back to back races. Endurance is as you would think longer races and then there’s a new mode Playground. Playground adds more longevity by introducing limited time new seasons online with mixture of pre-set conditions to race against. You can fight your way up the Global Leader board and race against the ghost car to improve your times. Multiplayer is available in all modes with split screen play 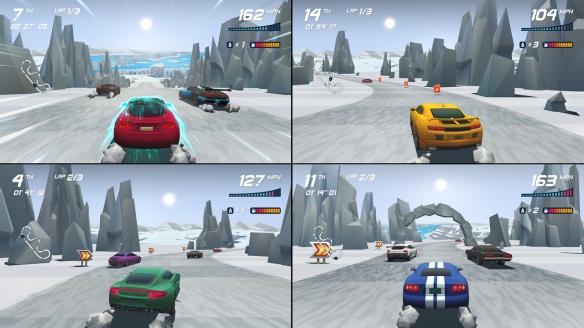 With gameplay, many modes and graphics wrapped up its time to mention the music. I am definitely in the minority, but I wasn’t a fan of the music overall by Barry Leitch. I found it a little too cheesy. I know that many will disagree and love Barry’s music after all he did do the music for 80’s racer Top Gear and Lotus Challenge. Maybe I just want Hiro of Outrun fame to play in the background.

Music aside as it’s a personal preference there were a few other negatives to point out with minor framerate drops when things get busy and the game had crashed out several times and locked up. Hopefully a small update will sort out these few niggles in what is a solid racer on the Switch that looks stunning, plays like a dream and has plenty to keep you coming back for more.

Horizon Chase Turbo is available on the Nintendo Switch eShop for download at the price of $19.99.

A big thank you to Aquiris Game Studio for supplying the review copy.

Lots has been going on with OutRun restore over the last month or so and it’s not just me sticking a screwdriver into my finger so here goes……..

It’s take about 4 weeks to put in the wire harnesses and repair damaged ones. Several wires in the machine had been twisted together and taped. So all of these were remade with new wire and some new connectors were also required as pins broke trying to remove them.

Everything now pretty much in place. No more tape on the monitor wires, monitor isolator. I also fixed up the eight 5v power cables to the PCB.

Next the control panel was re installed. Since this pic below everything has been greased too with will miniseries wear but also makes the mechanical parts quieter when moving. 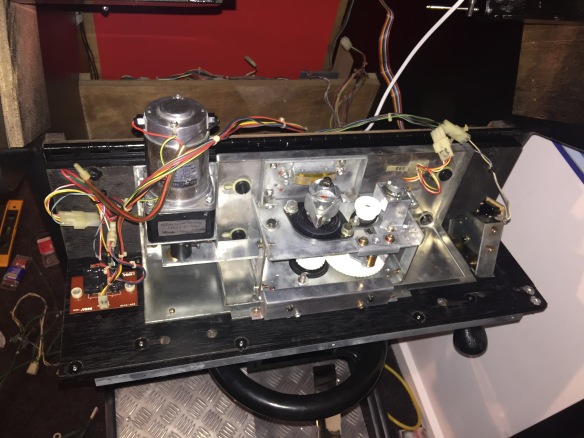 A new LED light has been wired to the AC power box and then after 13 months of restore I finally turned it on. 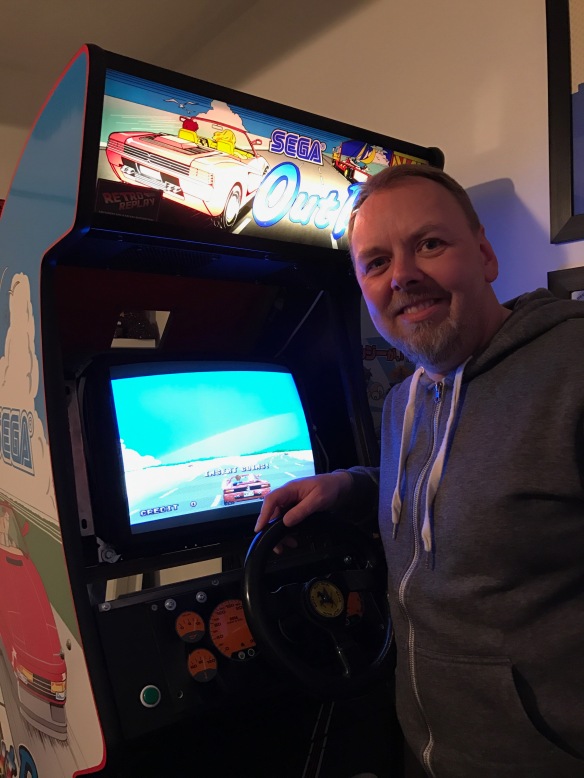 Some adjustments were made to the monitor and then all electrical parts were checked. No sound was coming from the machine so after a few days of investigation I found both speakers were shot. Will need to pick some up soon.

One or two more updates to completion 👍

Last weekend my wife kindly helped my take the cabinet for a ride from the garage to the house. It wasn’t an easy process as it had to go along the road (where several cars passed us) and down a second driveway at around a 40 deg drop. Then it had to go down and up a few stairs. It was kinda scary and I had a feeling that we would all end up in a heap at the bottom of the house. I’m happy to say we all survived !
The cab is now in the house and my wife couldn’t be happier …..mmmm #arcadewife
I lined up the side art and found it needed trimming around the top curves. After taping  it down to the cab I used a specially crafted piece of Lego taped to a pencil to mark a 6mm line around the edges and then trimmed it. 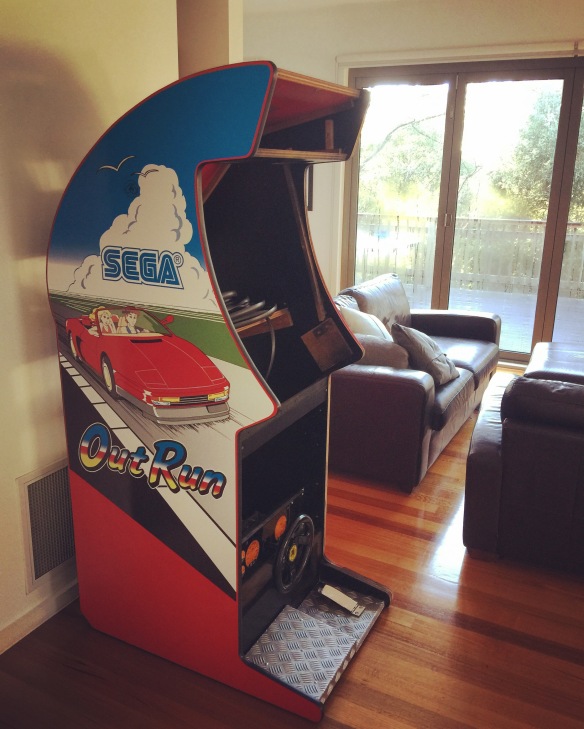 The final result came out really well and there’s a nice even edge between the side art and the Newly fitted T-Molding.

I will do a further update to this post later this weekend with progress to the CP.

Finally after many many hours of work it’s starting to all come together.

3 months have gone by since my last restoration update when I had the side art printed but there’s been plenty going on in the background so here goes….

More work and time has been put into repairing the cabinet, I’m finally happy with it and it’s painted ready for the side art. This is planned to be applied in the next few weeks. 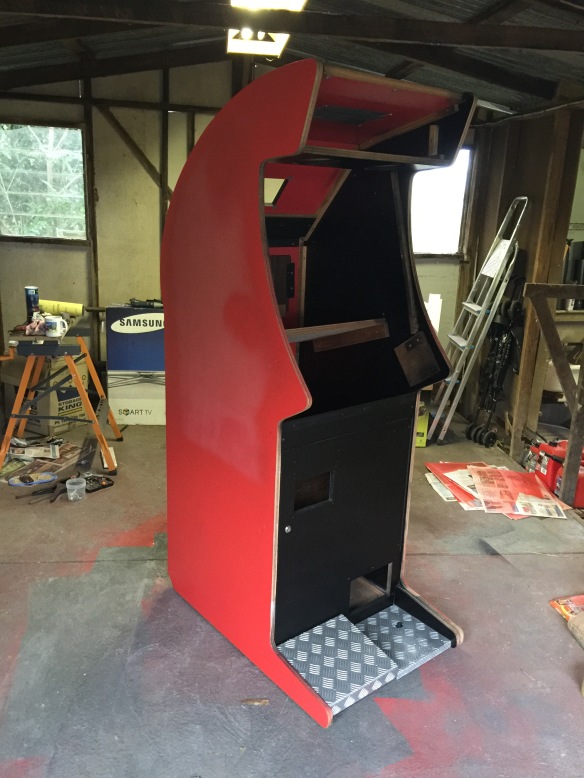 3 locks have been fitted and all doors are repaired. Foot plates have been polished up too.

The steering mech has had further assembly and this has now been fitted to the freshly painted wooden control panel. 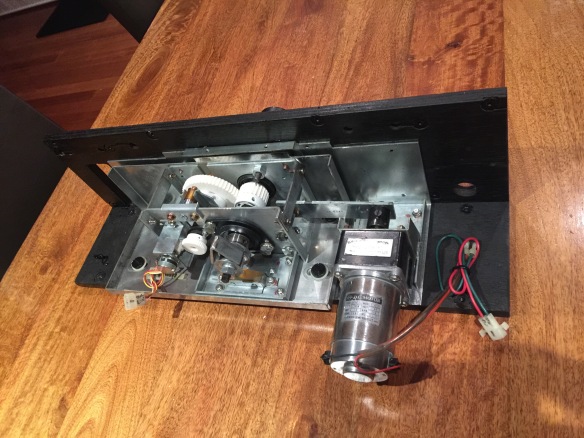 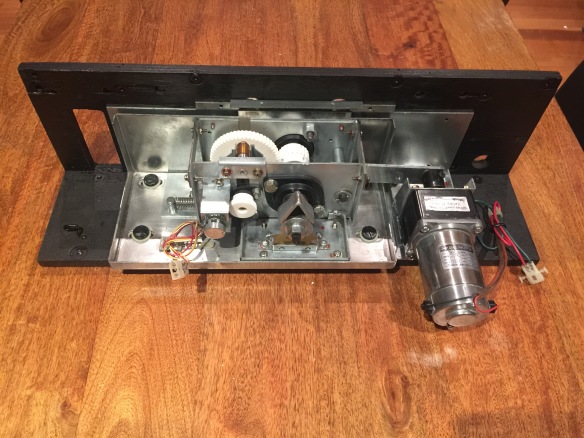 Go to the Restoration page for a small update on cabinet repairs and side art is also printed. 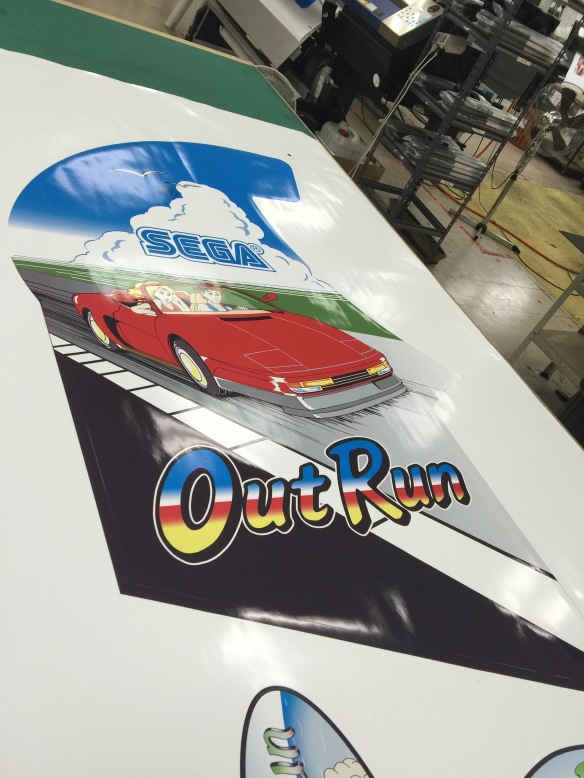 New update on the OutRun restoration around woodwork. > https://outrun86.wordpress.com/9-5-lai-upright-outrun-restoration/

Today I’ve received from a graphic designer redrawn side art for the OutRun resto project. As it was for just for personal use and not for business he did the work for free, so thank you Alfonso, top man.

Originally I was given totally redrawn side art from an OutRun buddy called David in the UK. He had paid to have it painstakingly recreated after not being happy with the poor mirrored side art you can pick up online.

The Australian machine has a curved section at the rear of the cab whereas the uk version goes straight down. I took photos and measurements of the curve and had the artwork modified. (Above you can see a curved area now at the rear just above the road)

The Australian machine also has the manufacturers logo on the side art so I had this added too like the original. You can see this below in the photo (Just below the seagul) 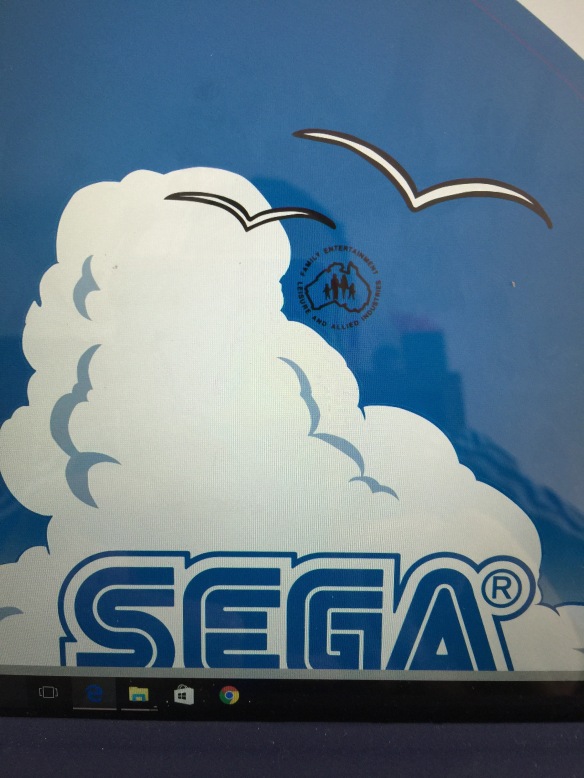 I plan to get the artwork printed out in April.

Please note- as this artwork was gift and had been expensively recreated and paid for by a friend in the UK plus modifications have been carried out in good will not to sell it I have been asked not to share it or have it reprinted. I respect this request so please do not contact me to get a copy, request a print or request to pay me for a set as I wont do this or answer requests on the subject.

Yesterday I received a parcel of more parts from the U.K this time. A fellow OutRun restorer and amazing OutRun buddy (I won’t mention his name so he doesn’t get hounded by people) was very kind to send me this awesome parcel below.

It contained various decals, SEGA security screws, wire harness clip, complete gear shifter and a custom chrome plated accelerator pedal. (And the OutRun mug minus the tea) which was a nice surprise 😄

A huge thank you mate (you know who you are) this will be a big help in making the OutRun dream come true!

When I started this blog I never thought I would ever title a post like this one. We’ve see OutRun t-shirts, custom Shoes and Ties and now we have Hot Pants!!

Unfortunately I don’t think these are for sale right now but if they were I would love to see my wife’s face on her Birthday when she received them lol.

Check out the link here on Instagram and find out who’s legs are showing of these great HOT PANTS > OutRun HOT PANTS! 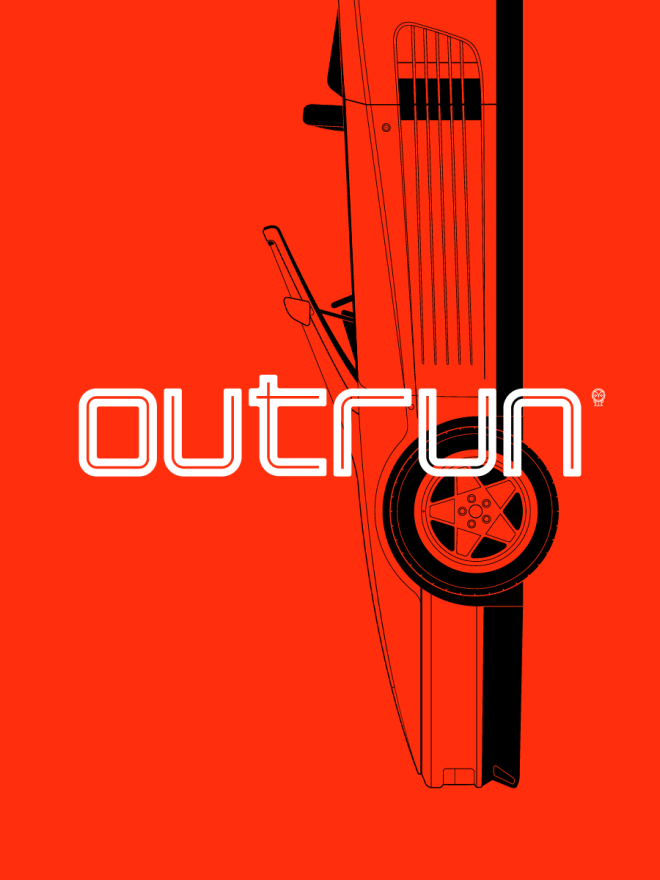 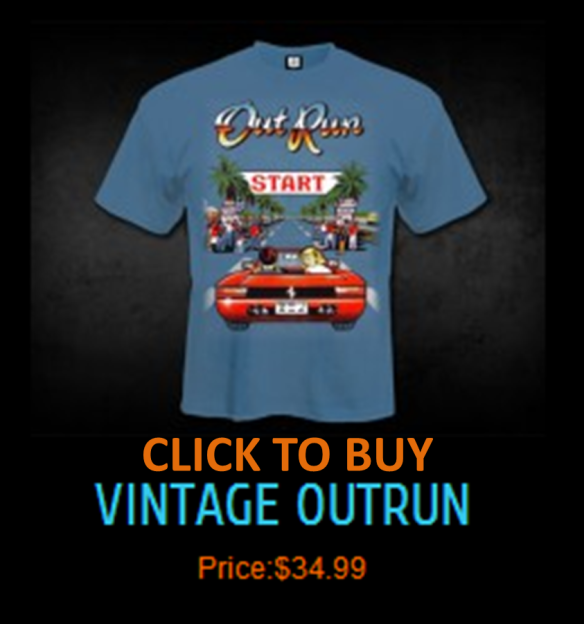 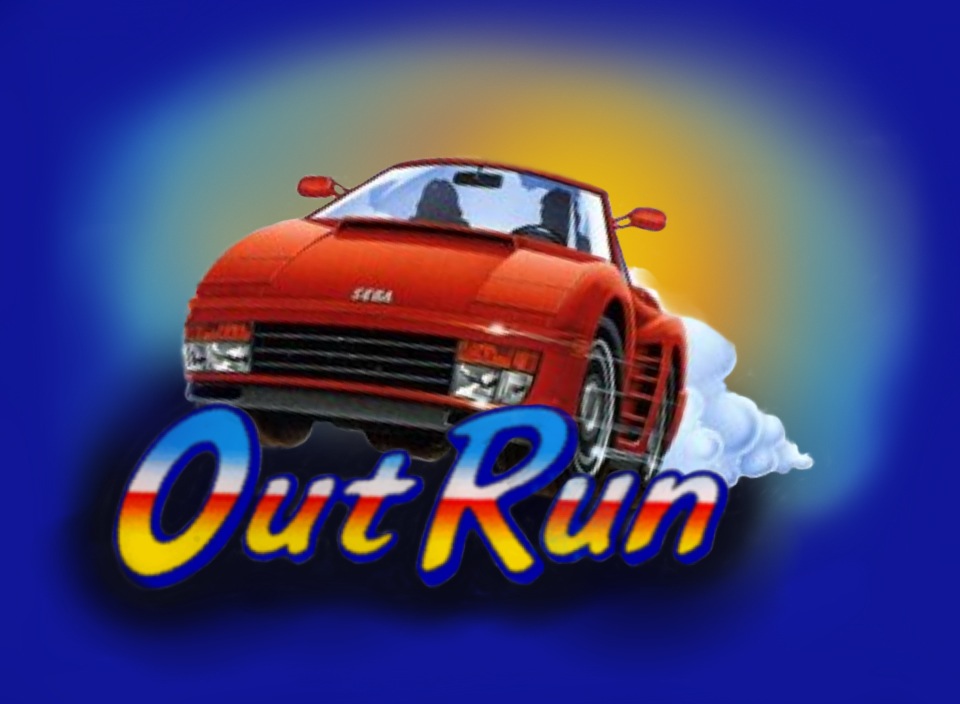